You can lower your power bills by using energy more efficiently.

Consumers can gain more control over their power bills and help keep future prices lower by using energy more efficiently, and TVA and your local power company can help.

A major driver of electricity cost is the growth of “peak demand.” Peak demand is when the greatest amount of electricity is used during the day, especially hot summer afternoons and cold winter mornings. When everyone uses a lot of electricity at the same time, it costs more to produce.

To make enough electricity for peak times, utilities must use more power plants — including special “peak” plants that are more expensive to operate — and buy extra fuel, which greatly increases the cost.

Typical Use and Monthly Cost of Appliances

Cost estimates are based on an average price per kilowatt-hour of electricity in the TVA service territory. Energy consumption and use are examples.

More information about the evaluations and other energy-saving tips is available on the TVA Energy Right website. The site also includes information on incentives available for purchasing energy-efficient products.

Electricity powers modern life and is one of the most economical, reliable, and important products we use. Modern society depends on electricity to power virtually every aspect of our lives – from household appliances that keep us comfortable, to electronics that entertain us, to our offices, schools, factories, and hospitals.

Electricity is solidly reliable – it’s there when you need it, and it’s a good value. For more than 50 years, the price of the basic unit of electricity has stayed relatively low, although much more electricity is being used each year. A kilowatt-hour of electricity cost about 2 cents in 1946. Today, a kilowatt-hour of electricity in the Tennessee Valley region is only about 9 cents, well below the national average. Meanwhile, the cost of other basic items, such as a gallon of gasoline, pound of cheese, or loaf of bread, has increased dramatically. For example, a gallon of gasoline that cost 16 cents in 1946 is more than $3.00 in 2011. 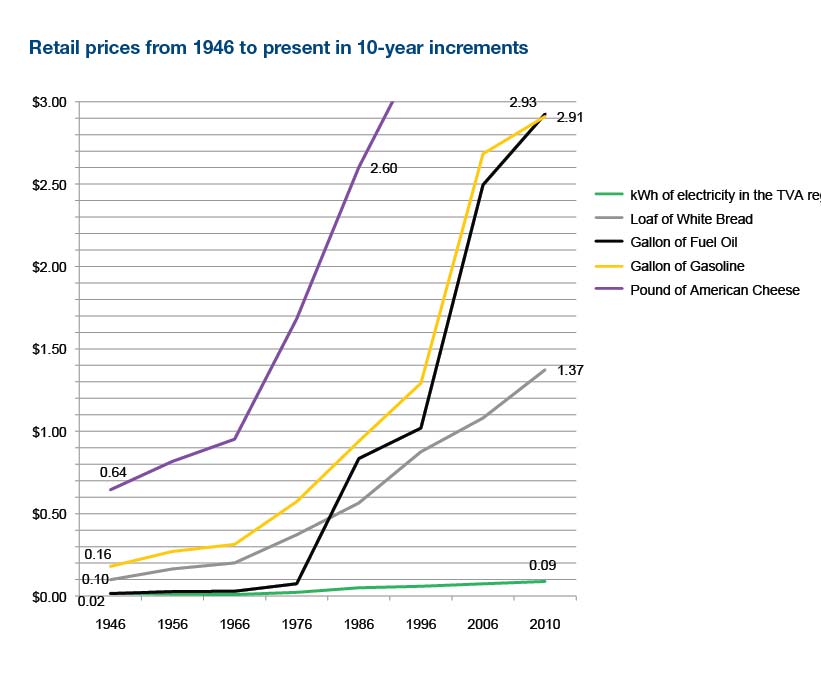 In recent years electricity use has increased most during certain times of the day, such as early morning and late afternoon. When demand peaks, utilities must add more expensive energy sources, which forces costs to go up.

Consumers get the most value from their electricity dollar by managing their use of electricity. That helps lower monthly bills, reduces peak demand, and keeps future prices lower for everybody.

The Price of Power

Not every kilowatt-hour of electricity is created equally. Some kilowatt-hours cost more to make than others. There are reasons for that, including the kind of fuel that generates the electricity. But a big factor is when people use it.

Did you know it costs much more to make electricity in the middle of a heatwave than on a mild spring day? Most people don’t because every kilowatt-hour has cost consumers the same, no matter when it was made or used. There are reasons for that, including the kind of fuel that generates the electricity. But a big factor is when people use it.

As more electricity is used, the cost of producing it also rises. Providers also may have to buy more expensive power from other companies to supplement their supply. TVA and local power companies are beginning a gradual transition to pricing that reflects the changing cost of electricity during different seasons and, eventually, during different times of the day. Many utilities across the nation also have begun this process.

The chart below shows the mix of generation sources needed to supply power across the Tennessee Valley region on a hot summer day. The quick-start natural gas plants, which are typically used during peak demand times, are by far the most expensive to operate. 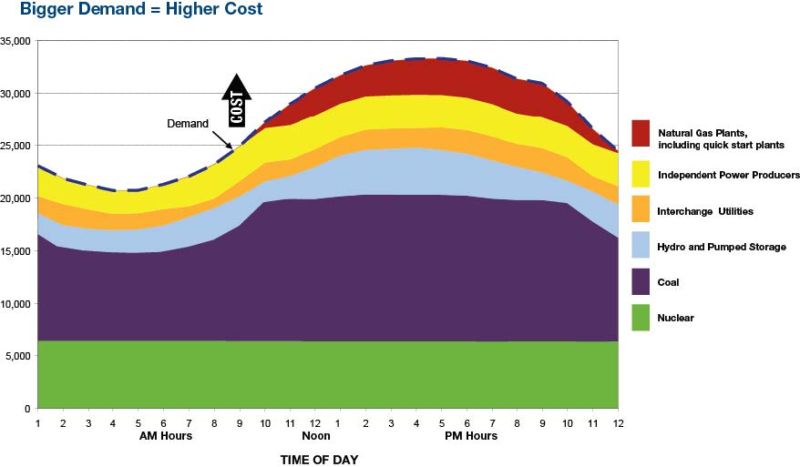 Over time, peak demand has been growing faster than the growth of everyday power requirements. That means more generators designed to meet peak demand must be built.

Peak demand occurs at predictable times of the day and year – like summer afternoons when many people return home from work and turn on the lights and air conditioning, or on winter mornings when the heat is turned up while people get ready for work or school.

Electricity demand is highest during certain months and certain hours. And as demand rises, energy becomes more expensive. The peak demand hours on the TVA power system occur in the afternoons and evenings of summer (June-September), noon to 8 PM Central, 1 PM to 9 PM Eastern, and early to mid-mornings of winter (December-March), 4 AM to 10 AM Central, 5 AM to 11 AM Eastern. Peak is Monday through Friday, Weekends and federal holidays are off-peak. Beginning in April, the price local power companies pay for electricity will reflect these high demand periods.

Time-of-use pricing for consumers will become more common as new meters that can track hourly changes in a consumer’s electricity usage become available. This will allow consumers to make decisions about when they can use less-expensive power to lower their bills.

Finding and implementing ways to lower peak demand on the power system will reduce the need for expensive new power plants and keep costs low for everyone.

Energy Right – The energy right Program from TVA and your local power company encourages, communicates, and supports the wise and efficient use of electricity.

TVA Kids – Learn about electricity and have fun with games and activities too.

Green Power – TVA and participating local public power companies, working with input from the environmental community, have created a program called Green Power Switch® to produce electricity from renewable sources and add it to the Tennessee Valley’s power mix.